Artist: Nurse With Wound
Album: Chance Meeting on a Dissecting Table of a Sewing Machine and an Umbrella
Rating: 4/5 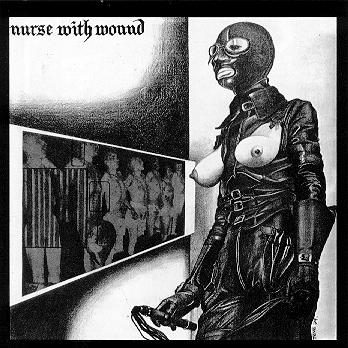 To preserve my first impression of this album forever, I will write this review upon my first hearing.

I'm not even really sure what I expected this album to sound like when I hit the play button, something "industrial," though that genre is pretty loose. Basically, I expected musique concrete and noise funneled through an Industrial sense of driving rhythm.

The first track more or less provides an antithesis to this assumption. Enter Two Mock Projections, the first and shortest track on this disc (only six minutes!), and arguably the most accessible. I'm greeted with spacious, dark-ambientesque reverberations and drones, with loose, psychedelic guitar jamming pasted on top. For six minutes atmospheric elements and guitar jamming intertwine and play off each other, until ultimately clamoring for control of the track as what was once background has now become foreground and the dominant guitar is pushed aside.

The song ends and the immediately more abrasive The Six Buttons of Sex Appeal takes its place. Electronic screeching and other digital distortions and feedback form layers of this song, all supported by a very basic drumbeat. The chaos twists around on itself, new elements are introduced, hints of melody are briefly flashed at us as our heads continue to spin around in circles. The drums slowly drift into the foreground of the track, giving it stronger rhythm and all of a sudden the guitar noodling from hell is replaced by wailing vocals, which predictably morph into raspy screams until ultimately subsiding. Based on this track it's easy to see where Black Dice draw their influences. In traditional music, you might expect two guitars to counterpoint, here we have two guitars violently struggling against one another with feedback and screeches, of course aided by a driving tribal beat. Though one might sound “prettier,” which of the two is more visceral and direct? The track slowly subsides and tapers off, as the guitar part goes from noise to aimless noodling and the drums crescendo then fade away.

We are now confronted with Blank Capsules of Embroidered Cellophane. It starts of minimalist enough, a few interesting sonic manipulations thrown together. Reminiscent of Pere Ubu's Sentimental Journey, as unidentifiable objects clang randomly, a guitar is sort of played, and an ominous frequency drones in the background. Some saxophone and piano lines are introduced into the piece, though they function in more or less the same manner as the non-instrumental components do, that is, simply to provide texture or counterpoint, not necessarily harmony. Elements disappear as suddenly as they were introduced, but never is there anything “going on” that seems extraneous or unwarranted. Somehow, these conflicting noises do mesh together to form a bizarre aural landscape.

If you made it through the half-hour long Blank Capsules, only one song stands between you and the end of this album: Strain, Crack, Break. It opens with a schizophrenic juxtaposition of vocal samples, in various languages, with only the occasional understandable statement (“John Cage. Captain Beefheart.”). Other samples pop up occasionally, and the vocal samples become more and more distorted. If you make it through these last fifteen minutes all the way through this album, be glad, for you have reached the limits of music with your sanity intact.

Though this album is a harsh contrast to ambient music, seeking to confront and challenge rather than placate, I find it functions in much the same way. Whereas most music is concrete and relatable, this music is abstract and alien, and as such works best as background music. When you focus too hard you get a lot of seemingly random noises that go nowhere. When you leave it on and let it subtly invade your subconscious, you're left with an indistinct image of nebulous soundscapes, and a somewhat odd sensation in your stomach.

In any case, I quite enjoyed this album, and since ratings and their blasted objectivity always give me grief, I'll settle with the ominously ambiguous (in my mind, at least) 4/5 stars. If you do listen to this record, please approach it with an open mind. That's all I ask.